Editor’s Note: What’s not to like here?  McFarlane toys are great and we all love Game of Thrones, plus the prices look very reasonable! 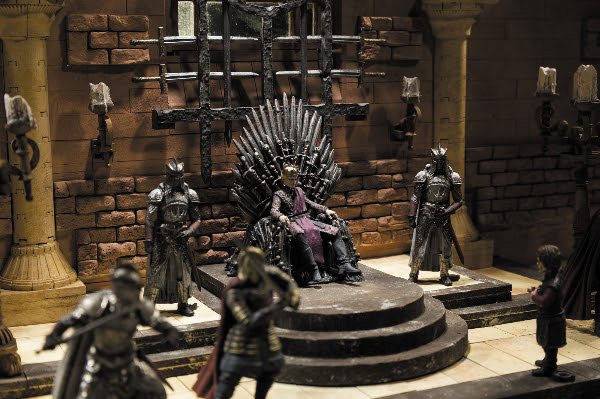 Todd McFarlane, CEO and founder of McFarlane Toys, said, “I’m very excited to work with HBO. They are a world-class network and Game of Thrones is one of the most visually compelling shows that I’ve ever seen.”

“We’re thrilled to have the opportunity to create high-quality collectible construction sets based on this fan-favorite property. Both collectors and fans of this epic series can build their favorite scenes with this new product line,” McFarlane added.

Each Game of Thrones construction set will feature iconic environments with realistic sculpted pieces, along with multiple figures of fan-favorite characters.

McFarlane Toys will be unveiling the first look of this new product line, including the legendary Game of Thrones Iron Throne Room and Mother of Dragons construction sets, at International San Diego Comic-Con from July 8-12 at booth #2729.

The launch of Game of Thrones construction line will feature construction sets, expansion packs, and figure blind bags for fans ranging in price from $3.99 to $49.99 and will start hitting stores shelves in November 2015.

Construction Sets: MSRP $14.99-49.99 – Depicting the most outstanding moments from your Game of Thrones, including the Iron Throne Room, Mother of Dragons and Attack on the Wall, each set includes scene specific characters, stunning details and realistic accessories.

About HBO Global Licensing:
HBO Global Licensing officially licenses the HBO® brand for the development and merchandising of innovative product lines inspired by the network’s award-winning programming. With products created around hit series like Game of Thrones® andTrue Blood® as well as classic series like The Sopranos®, Sex and the City®, andEntourage, items include fashion apparel, figures, jewelry, digital and CD soundtracks, prop and costume replicas, games, books, and beverages, as well as exclusive, premium collections in partnership with upscale, designer brands. Merchandise can be purchased in retail stores nationwide, at http://store.hbo.com, and at the groundbreaking HBO retail hub, the HBO Shop®, located at 42nd and 6th Avenue in New York City. HBO Global Licensing products are also sold internationally across Europe (www.hboshopeu.com), Asia and Australia.

Previous articleWhat’s In Your Subscription Box This Month? [Infographic]
Next articleHow Workout Supplements can help you Reach Your Fitness Goals

The Walking Dead: The Telltale Series – A New Frontier ep4

We just played through Episode 4 - Thicker than Water from The Walking Dead: The Telltale Series and wanted to...
Read
INFOtainment

Are Virtual Summits Here To Stay?

COVID-19  has changed many things about life and going virtual has been one of the major changes that...
Read more
Advertisment

Annette Larkins May Have Found The Fountain of Youth