They came at me from all directions this past weekend. Imagine ants headed for a Jolly Rancher on a sidewalk. They converged on every human that did not look like them. They were young and old, male and female, and they all wanted something from me. I could see by the looks on their faces that they wanted something as if their physical appearance was not enough to give their agenda away.

I call them the gray people. They have an aura of gray around them, an aura of sadness or regret, of mistakes and escapes and adventures experienced regrettably not worthy of words in an adventure tale. Their aura and their bodies shared this grayness, the hue one attains when one doesn’t shower for days or weeks. The stench is powerful enough that it precedes some of them by meters. Their numbers are astonishing. 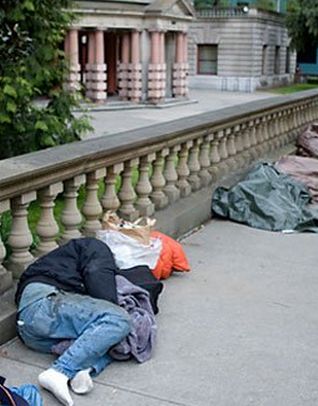 I saw these people in Portland. They are everywhere, on very block, under every bridge, on every street corner. They are part of the street scene but it’s impossible for them to fade into the landscape. If you want to walk down the street in Portland’s city center you will come in contact with them. It is inevitable, your contact. Their sheer numbers overwhelm the non – panhandling, sick, mental, drunk, sad people they are attempting to get something from.

They are in every crack and crevice of every building and sidewalk and façade and alcove. They are so large in numbers you would be be alarmed. Most are in a fog, a few want to steal our phones and a couple of them would stab us for a wallet or purse. What to do about this population of humans who want something from me, and who want something from you?

The city government of Portland is Berkeleyesque; liberal is not the word to characterize their politics. Sorry Tea Party – these folks are real deal socialists, apparently proud to nanny each and every citizen into a permanent client relationship with government. The leaders of the city are so far gone leftward that it’s impossible to image a lefty-centrist holding influence over much of anything there. You have a beautiful, cool, foodie, hipster-rich enclave with a vibrant music and arts scene, progressive in all the right things. But I’ll bet you the national debt not one person in Portland would tell you they enjoy stepping over a 20-year old kid who looks like a dog in need of grooming, passed out next to a bowl of food, a black rat nibbling on the leftovers.

We can’t round them up and send them to a facility for “processing”, whatever that might mean. We can’t arrest them. We can’t shoo them away hoping they will never come back. They are coming to Portland, and they are going to keep coming. I sat with three anti-establishment anarchist-Occupy types on a BART train today who were discussing a friend’s planned pilgrimage to Portland. One said, “Does Jake have a job?” Another replied, “Nah. He doesn’t need one.”

We are playing Whack-A-Mole with them – for every one that goes away, another pops up immediately.  I hate these people, in a way that we all do but would not dare say in mixed company. We hate them not because of who they are, but what they represent – a society unwilling to be our brother and sister’s keeper. We hate them because they are inconvenient. We want to look away; we want them to be someone else’s problem. We say we care about them but we don’t. We are in an intractable, impossible permanent relationship with the gray people, a relationship that would be nicely repaired by jobs, health care, drug and alcohol treatment, and mental health intervention, at a price tag of 500 quintillion dollars. After we spend all the money and pat ourselves on the back and tax ourselves out of our asses for our good intentions, the problem will still be there the very next day lying on the sidewalk.

Isn’t it unbelievably ironic, then, that the beggar and the begee, the pauper and the prince on the streets of Portland, Oakland, Santa Monica, San Francisco and (your town here) have something very much in common, a bond so strong it will never be broken by a law or a tax or a decree or a regulation: entitlement.

For many street kids, they know only one thing – survival comes at the kindness and expense of others. When they were very small, if they were lucky to have a roof over their heads, a parent gave them what they needed. Out of the house now, and on the run, they know that if someone gives them something they can get through another day. Consider a desperately poor person in any country on Earth – they only know benevolence as an income stream. They are not able to connect work with reward. They work so hard already, trying to stay alive.

Now let’s look in our mirror, we with our unimaginable riches. We are entitled to covered parking, for our flats to arrive from Zappos on time, for our dinner reservations at that fabulous new  restaurant to be honored. We are entitled to a paycheck and to our kid’s acceptance into that elite soccer program so we can helicopter their spoiled entitled little butts right into a fabulous private school and hopefully they’ll eventually marry some skinny bitch named Windsor and live happy ever after.

We want, we want some more. Many have earned it through hard work and sacrifice. We are reaping the benefits of our educated minds, market opportunities and office politics. We shouldn’t feel guilty for being successful – that’s the reward for our work. The homeless are entitled to ask us for the things we have earned, and we are entitled to the upgrade on Delta because, after all, we actually flew those 157,000 miles. We all feel a sense of deserving something, because that’s the way the good lord or natural selection decided we should be.

I was walking on the streets of Portland with this guy who works for a fancy NGO, a PhD and a legendary video journalist…and we’re headed to an Irish pub to feast on Guinness and stuff our faces and damn it, we’re going to be pissed if we can’t get in because we had almost burned up a hummus and roasted red pepper appetizer 20 minutes before.  We were walking under bridges and commenting on the legions of the gray people, lined up like a row of burritos on sidewalks, buckling down and trying to make it through the night in a sleeping bag with their rat roommates.

We’re both entitled and it doesn’t make sense and we don’t know what to do, except turn our heads and hope that somehow, someway, we can forget about it all.

What does it mean to be our brother and sister’s keeper? Republicans and Democrats should both shut the hell up; they’re absolutely useless. From nanny know-it-all government to “pull yourself up by your bootstraps,” the sensible center is lost in the noise.

And the gray people are as bewildered as we are.

John Scotthttp://johnscottstories.com
John Scott is the career services manager and a media instructor at the School of Multimedia Communications, Academy of Art University San Francisco. His second book, "You. Employed."is available in the Amazon book store.

A few weeks ago I announced I would be putting my Facebook profile into a neutral state; I wasn't going...
Read
INFOtainment

Last week I posted a "life event" on my Facebook timeline: "John Scott Put His Facebook Profile In Neutral." I decided...
Read

Due to the relatively new nature of online education and the technology that has supported it, there...
Read more
Advertisment