Social television is a general term for technology that supports communication and social interaction in either the context of watching television, or related to TV content. It also includes the study of television-related social behavior, devices and networks. Social television systems can for example integrate voice communication, text chat, presence and context awareness, TV recommendations, ratings, or video-conferencing with the TV content either directly on the screen or by using ancillary devices.

That’s the textbook definition (thanks to Wikipedia), but what Social TV is at the consumer level is simply having the ability to interact, in real-time with television programming. Be it be social media streams (Twitter, Facebook, etc.), or by participating in chats and forum discussion on blogs (including network websites – cable channels in particular have really embraced the Social TV movement).

Recently I hosted a Twitter Chat with that focused on the increased relevance of SocialTV and the tools that are available for consumers.

Below are the Questions and Answers from that #ToolsChat session along with links to the tools referenced.

Along with the definition listed above, Nicolas Bry, Senior VP at Orange Innovation Group states that, “…Social TV means digital interaction between people about TV, and interaction with that content” [source]

From a consumer and brand perspective, why is SocialTV important?

We’re all tethered to a digital device these days. There aren’t very many standard/feature phones anymore – call it a 1st world problem, but we all have smartphones, tablets, laptops, and internet connected gaming consoles. That being said, brands are finding interesting ways to push marketing and advertising opportunities to our devices.

So for consumers, it’s great to have a steady stream of information that is relevant to you personally.

For brands the challenge is to ensure that the content being pushed to the consumer is in fact personal, relevant AND doesn’t end up spamming our various social streams with advertising.

Key take-away: Be careful of what you opt-in for and what you tell Facebook to post on your behalf, because it will undoubtedly end up captured within your social stream.

It’s not who you would immediately think – it’s not just the teen, and mid 20’s crowd engaging and utilizing SocialTV. Now that Nielson is tracking tweets we’re beginning to get some decent metrics.

Even though this data was gathered late last year, you can safely assume that next time this calculated that the numbers will be percentage points higher for the “Population on Sites Talking About TV”.

Reports also state that the minority audiences are becoming larger targets of inclusion by brands and marketers as it relates to SocialTV. Case in point, I recently spoke with an agency that works with large brands and they focus 100% of their efforts on positioning marketing, sales, and engagement opportunities with the digitally-connected minority population.

What’s the value of the check-in and/or hashtag with SocialTV?

I feel the #wifm (what’s in it for me) for checking into a show or tweeting about a show is primarily a subjective recognition. For the most part, you’re only publishing the acknowledgement of your participation in an experience. That experience can be either positive or negative or a neutral informational update.

There’s been many times that I’ll tweet out scores of a game or highlights of a show when something significant happens – case in point #WorldSeries and #Olympics – my Twitter IDs were on fire during those events.

It’s hoped that the sponsor/brand that is tracking these interactions will respond quickly to consumer feedback be they negative or positive if only to show acknowledgement that your voice is being heard.

The hashtags on the bottom of the screen are tightly integrated with their social media platforms like Facebook brand pages, Pinterest, and landing pages on their websites. This integration typically is coupled with some form of reward system – either a recognition that you can share within your social sphere (like the badges in Get Glue, or a shopping incentive, similar to what iTunes has done with awards and singing competition shows).

I have to point out the one show that is, in my opinion, still doing social wrong. That show is The Amazing Race. I only point out this show because I actually love the show and wish they’d get it right (I actually tweeted them about the situation):

.@amazingrace_cbs whomever is running your #socialmedia is doing it wrong – the use of hashtags is more annoying than useful. We can help!!

I haven’t gotten a response yet…

Here’s my reasoning for giving The Amazing Race this unfortunate classification. If you watch the show, you see after ever challenge and after every stop around the globe that there is a new hashtag. For instance, if the contestants fly into Moscow, the hashtag is #Moscow. If they end up getting a Speed Bump, the hashtag changes to #speedbump. Not good – very confusing and incredibly difficult to measure overall engagement. My recommendation, stick to one hashtag (#AmazingRace) and gather cumulative metrics on viewership and query the Twitter updates to see what viewers are actually saying.

Here is a short list of some great tools that fully embrace the SocialTV experience. What’s nice is that each of these platforms is available on both Android and the iOS platforms.

IntoNow – @IntoNow gives users the ability to almost instantly recognize TV content and then helps them share and discuss those shows with friends, both within the product and through other social streams such as Facebook and Twitter.

Viggle – @Viggle is a loyalty program for television that gives people real rewards for checking into the television shows they’re watching.

Zeebox – @zeebox allows you to see what friends are watching, invite them to watch shows with you. Chat, share and tweet. Play games, get stats during sporting events, buy products on the screen and follow celebrities

Tok – @TOKtvUS gives TV networks the opportunity to engage more with viewers and monetize that experience. Now only focused on baseball, but they are actively building a football app/experience.

For more Tools I’ve also created a list on list.ly that is crowd-sourced, so if you have a tool that you like that you feel needs to be added to the list – Add it!!

Would love to hear your thoughts about this topic. 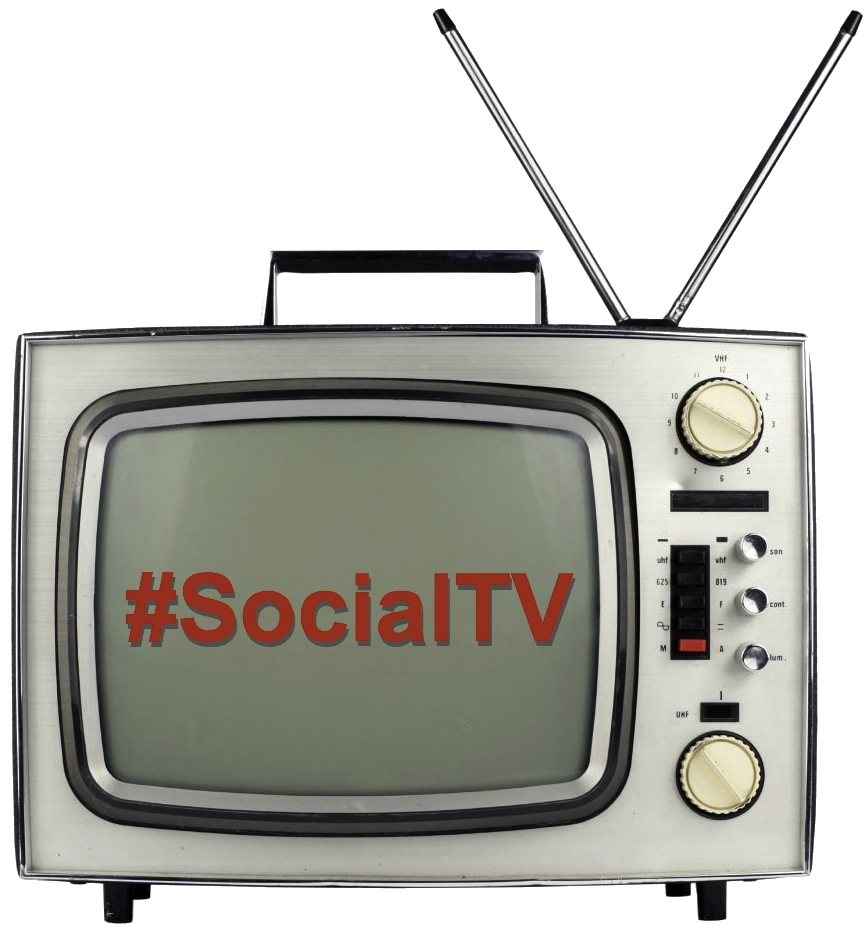 Connect with your friends around the shows you love.

IntoNow gives users the ability to almost instantly recognize TV content and then helps them share and discuss those shows with friends, both within the product and through other social streams such as Facebook and Twitter.

Viggle is a free app for Android and iPhone. The first loyalty program for television, check in to shows and earn real rewards for watching TV.
Watch TV. Get Rewards.

Social TV: How Marketers Can Reach and Engage Audiences by Connecting Television to the Web,Social Media,and Mobile

Social TV: How Marketers Can Reach and Engage Audiences by Connecting Television to the Web,Social Media,and Mobile [Mike Proulx,Stacey Shepatin] on Amazon.com. FREE super saver shipping on qualifying offers. The Internet didn’t kill TV! It has become its best friend. Americans are watching more television than ever before

ComparTeVe is a mobile application that recognizes what you're watching on TV, creating micro social networking environment to live programs, integrating Facebook and Twitter.

The Home of Social TV.

Covering the fast-growing intersection of television + social media. We curate the latest news and trends affecting the Social TV landscape. LIKE US ON FACEBOOK

Social television is a general term for technology that supports communication and social interaction in either the context of watching television, or related to TV content. It also includes the study of television-related social behavior, devices...

To experience the full glory of Boxfish you need to download our Live Guide for iPad. In the app you can set alerts, access full transcripts and create favorite topic and channel lists. If that's not enough it even connects to your set top box and works as intelligent remote control. The Boxfish Live Guide will transform how you discover and connect with Live TV.

@TOKtvUS is focused on sports and gives TV networks the opportunity to engage more with viewers and monetize that experience.

We all work with different file formats every day. Sometimes, our tasks require us to convert file formats...
Read more
Advertisment

We all work with different file formats every day. Sometimes, our tasks require us to convert file formats into other ones. A...
Read more

The 3 Simple Ways to Promote Your Business Online

Marketing strategies are crucial to any business or company. Your goal is to reach a wide range of audiences and convert them...
Read more