The Top 5 coming-of-age movies for girls

When you’re 12, there is nothing more exciting than a night in with your best girls. Wearing pyjamas, eating popcorn, watching movies and attempting to raid your parent’s drink cabinet are essential elements of any girly sleepover.

A girl’s night in doesn’t differ much once you get older either, except once you’re an adult you can switch glasses of fizzy Fanta for bottles of wine, and stay up a bit later without causing the wrath of your parents the next morning. Snogging and boys are still discussed in immense detail, snacks are gorged upon and classic girly movies are lined up on the DVD player.

Regardless of age, whenever school (okay, the office) is out, bring your sisters, daughters and friends together for an end of school rewards night, birthday or simply to celebrate the summer break, and press play on one of these iconic coming of age movies…

Personal differences are a thousand times more pronounced when you are a teenager. They also are the basis of many fears.

In The Breakfast Club, five completely different kids who would never normally even look at each other are left in detention for a weekend at their school – a jock, a princess, a lout, a misfit and a nerd.

Over the course of the weekend they find out a lot about each other, and more important, kids, about themselves!

This is one totally cool movie, with common strands that stand the test of time, plus a really iconic sound track too!

Billed as a dark comedy, this teen movie features a gang of four girls, three of whom are called Heather, one Veronica. This is a study of big time bullying and intimidation by the Heathers.

Veronica really wants to be in with the cool crowd, but truthfully, she absolutely hates them – a classic recipe for disaster.

When she meets enigmatic Jason Dean, who also hates them, their plans to teach the Heathers a lesson turns into a more deadly game, and one that Veronica does not what to be involved with.

The message is: be true to yourselves, girls! Don’t change to be ‘in’ with the clique! 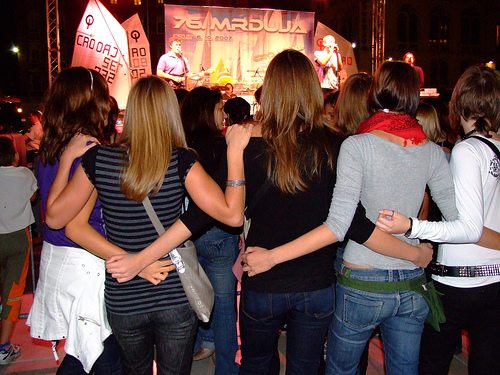 Another classic teen movie about the never ending problems of ‘fitting in’.

Cady has been brought up in Africa, but when she returns back to the States, she is desperate to make new friends at high school. First of all, she meets a couple of nerds, and then she meets their total opposites, ‘The Plastics’, the most popular girls in the school.

As she attempts to become friends with ‘The Plastics’ without them knowing of her less-popular comrades, she becomes embroiled in playground politics and a web of deceit. A rocky road!

She of course finds out who her real friends are in the end – friendship rules over everything else! Yeah!

A fun, upbeat movie about a teenage girl named Cher, who lives in L.A. and has everything a girl could want; all she has to deal with is what she’s going to wear and who’s dating who at high school.

But life isn’t always what you think it is, and it turns out that Cher is in fact a brat-with-a-heart, who is trying to navigate her way through the usual teenage tribulations such as parents, school, relationships, and of course, and most importantly, friendship.

A classic love story with plenty of awesome dance routines – what’s not to love?

Girl (Baby) goes to summer camp with her insufferable older sister and her mum and dad. She spots older man, heartthrob dancer Johnny, and dreams about a way of dancing with him.

When his friend gets into trouble, Baby gets her dad to sort it out, but a case of mistaken identity ensues, with heartthrob Johnny being blamed for the situation. With his dancer friend out of action, Baby volunteers to take her place at the end of camp show.

Will they be able to learn all the moves before the month is out? Will Baby and Johnny kiss? It’s all edge of the seat stuff, and about the greatest coming of age movie EVER!

What was your favourite coming of age movie when you were growing up?

About the author: Louise Blake is a lucky mum-to-be spending her last few weeks of pregnancy curled up on the sofa re-watching her old favourite films!

Previous article4 Cars from the Movies You Can Actually Buy
Next articleUrban Camping: Get the Traditional Experience in your Backyard!

You may have heard some of these “facts” about fitness that many fitness gurus will profess. However,...
Read

great list.But Dirty Dancing is my all time favorite 🙂