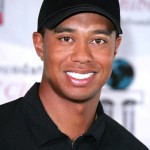 If you take yesterday’s performance as a measuring stick, then it’s safe to say that Tiger Woods was swinging the golf club like his old self at yesterdays opening round of the Chevron World Challenge in Thousand Oaks, Ca.

He birdied five of his first 10 holes at Sherwood Country Club on his way to a seven-under-par 65. That was good for a one-stroke lead over Rory McIlory and Graeme McDowell in an 18-man event in which all the players are in the world’s top 50.

Woods was on his way to his best competitive round since he shot a 62 in September 2009 until he made a bogey on the last hole after a terrible drive. It was one of the few loose shots hit by Woods on a day in which he hit every green in regulation on the front side and struck the ball with a clarity of purpose that was missing most of 2010.

“I was pretty impressed with what he was doing out there,” said Woods’s playing partner, Steve Stricker, who added, “He striped it all day long.”

The remaining schedule is as follows:

I'm happy to be part of the team behind the scenes working with Tammi as she chases her entrepreneurship dream. Starting today...
Read more