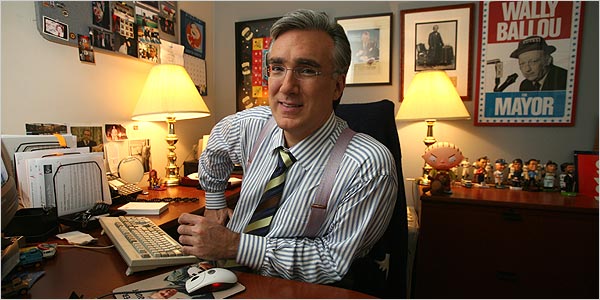 The Countdown with Keith Olbermann is officially back in motion after what seemed liked weeks, but was only 48 hours of front-page, lead story “news”

Olbermann came back tonight and made 3 apologies:

The first was “for having subjected you to all this unnecessary drama.”

The second was his failure to know about the rule regarding political donations at NBC — although, he said, such a rule was not in his contract, and “any rule like that in any company is probably not legal.”

His third apology was to the electoral opponent of one of the people he donated to, Gabrielle Giffords of Arizona, for including him in a “Worst Person In The World” segment the day after he made the donations. Olbermann said he had not known that the man, Jesse Kelly, was running against Giffords, but that he should not have been included in the segment.

Ah yes, now there is temporary peace within the Matrix once again – let’s see what happens next week.

Jaden Smith Wears an Iron Man Costume for Day Out With...